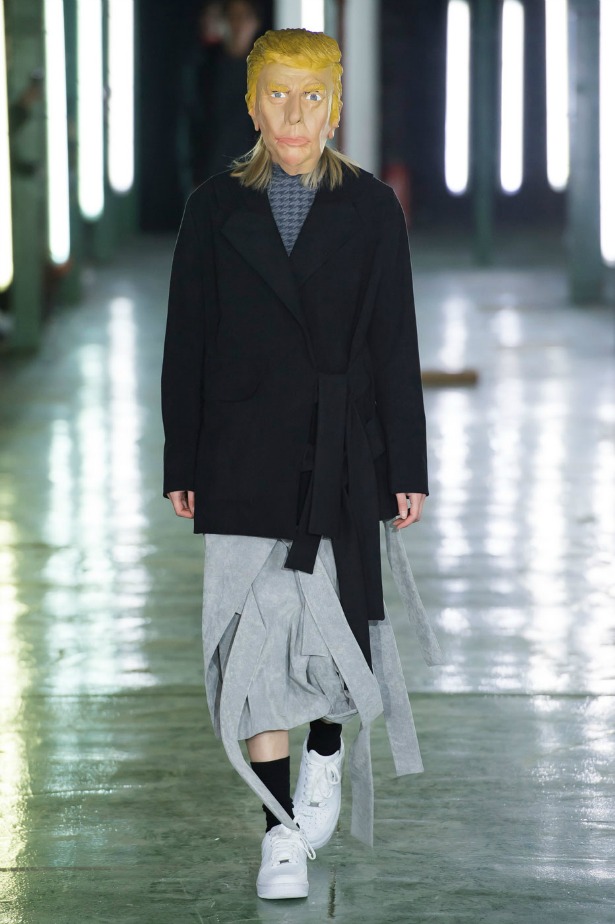 This story is about the one encounter I’ve had with Donald Trump in my life. It is not shocking. In fact, it’s pretty boring. And to be honest, it’s not even REALLY an encounter. But I figured if I’m ever going to tell it, now is as good a time as any.

Once in the late 90’s, I was modeling in a hair show hosted by Downtown Julie Brown, the famous (to all of us 16-18 year old models anyway) MTV host. Word backstage was that Donald Trump was also in the audience. Everyone had one of two reactions- either a sarcastic chuckle or an eye roll. A very cool Irish girl laughed, “Donald Trump at a hair show? His isn’t even real!” I guess he was kind of a joke even then. Besides, we were all too busy trying to catch a glimpse of our junior high idol, Downtown Julie Brown. We were absolutely starstruck. I was the second model to walk out, and sure enough, there he was sitting in the front row all by himself looking…strange.

I told you this was a boring story. And I would have forgotten about it completely if 19 years later he wasn’t the republican nominee for the president of the United States. It makes me think about what the democratic nominee Hillary Clinton must have been doing at the same time. Turns out she had just announced her candidacy for senate, which she would go on to win. She would become Secretary of State. She would play a leading role in the development of State Children’s Health Insurance. She would help create the Adoption and Safe Families Act and the Foster Care Independence Act. She would successfully fight to increase research funding for prostate cancer and asthma at the National Institute of Health. Through tireless investigation of the mental illness plaguing veterans of the Gulf War, she would help coin the term “Gulf War Syndrome.” The Clinton Foundation, founded by her and Bill, has improved the living conditions for nearly 400 million people in over 180 countries through its Initiative program. No biggie. And there are so many other things. All done while actively campaigning for women and children’s rights around the world, helping to raise minimum wage, and combating climate change.

Donald Trump was bumming around a hair show at the Chelsea Piers.

I think the problem with this whole election is that we’re treating this man like he’s a legitimate presidential candidate. We just can’t normalize him as a real politician. The joke has gone on for way too long. And unlike the joke about his hair, it could get dangerous.