I learned something this week. Apparently I was so hung up on the injustice of dress codes in schools all these years, that I didn’t realize that some restaurants in South Florida also have dress codes for real, grown adults and they are much worse than high school dress codes could ever be. For example, you can make a reservation at a regular ol’ steakhouse and then not be allowed in simply because you’re wearing flip flops, even when you are wearing a perfectly on-trend yet classic urban summer dress from Allsaints with said flip flops (in FLORIDA. Didn’t you guys basically invent flip flops? They’ve got to be your state shoe or something). Even when everyone else in the casino where said steakhouse Council Oak is located is dressed like it’s 2001 and brown lip liner and pageboy caps are literally everywhere you turn and you notice someone’s hot pink thong poking out of their low-rise studded jeans and suddenly you just really need to sit down and close your eyes for a second. Even then. Even when right outside on the strip there is a guy with dreadlocks and an ironic trucker hat singing Red Hot Chili Peppers covers (not even like “Fight Like A Brave” or anything, I mean straight up Californication BS), drawing a small crowd of no-necked guys with buzz cuts and identical button up shirts holding glow sticks. Even when he switches to Sublime covers, and are your eyes deceiving you? Are you seeing an Ed Hardy shirt? Oh yes you are. EVEN THEN. Even when your husband is talking to the manager like the seasoned professional that he is and explaining, “Look, I know you are probably just starting out in this business. But if you decide to continue on this career path, you will realize one day that this was a mistake. Are you honestly going to look at this woman and tell me something is wrong with her appearance? You WANT people who look like her dining at your establishment. She could walk into any $300 a plate restaurant in New York City dressed like this and be welcomed with open arms.” Even then. Then I zoned out for a second during their conversation and thought to myself, “Huh. I’ve worked in fashion my entire life. Is it possible that I don’t know as much as I think I do? Was that degree from the Fashion Institute of Technology a waste of money? Has this restaurant staff never flipped through the pages of a J. Crew catalog? No, that can’t be right. I mean I’ve been in print meetings with Nicole Miller and Anna Sui with people wearing flip flops. I’ve been in trend meetings with people who INVENT FASHION TRENDS wearing flip flops. I’ve even seen people wearing the occasional flip flop paired effortlessly with a caftan or leather legging during New York Fashion Week events.” Years ago my best friend designed t-shirt graphics for Abercrombie & Fitch, and they gave their employees two options of footwear to wear to work – Converse or FLIP FLOPS. Their dress code WAS flip flops. And they were actual clothing designers for gods sake. When I texted this friend about this, he replied, “It’s Florida, are you sure you didn’t get kicked out for wearing heels?” 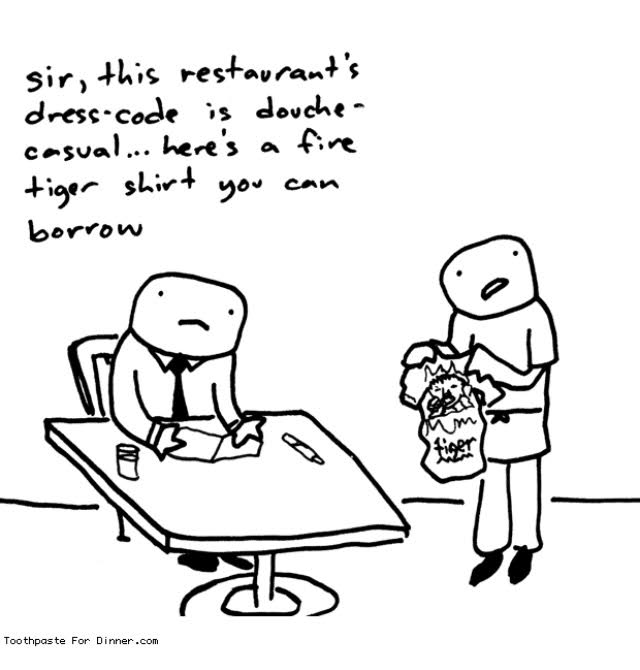 Sadly, places with these micromanaging rules reek of desperation. It’s as if they want so badly to be “fancy” because they know deep down they’re mediocre at best. You’re basically asking your clientele to do the work for you. “Please try to look so good that nobody notices how subpar our food is. And then pay us for the privilege.” Unfortunately you’re going to realize soon that people are tired of doing your work. But it’s not too late. Before that happens, let me Obamacare your whole problematic dress code system. Wait, maybe that’s a bad example. Anyway, the fact of the matter is that we live in an age where Barneys sells ripped (ahem, “distressed”) t-shirts for $440. And people buy them. Like it or not, this is the current situation when it comes to fashion. This antiquated notion that you can’t look cool or put together in flip flops is as outdated as women thinking they need to wear shoulder pads in the workplace to be taken seriously. Would I walk into 11 Madison Park wearing flip flops? Probably not. But if I did, it would be none of their concern because they would be too busy being the very best at what they do. Council Oak, you absolutely must evolve from your current stagnant stance on fashion. Because you know what they say, “What is the difference between a living thing and a dead thing? In the medical world, a clinical definition of death is a body that does not change. Change is life. Stagnation is death. If you don’t change, you die. It’s that simple.” And you don’t want your restaurant to DIE, do you? Come on. Help me help you.

This morning I put R.E.M.’s “Green” into the kitchen CD player on repeat (I’m a luddite), and when the song “Stand” came on I danced around with my children, everyone all smiles and laughter, and felt so much joy I thought I would burst. Toward the end of the song, my toddler disappeared. As the next song was starting, I heard coughing coming from the next room. There he was, suddenly with a full mouth of cereal, possibly choking. My heart was gripped by fear as I got down on my knees to investigate. He immediately stopped coughing, and started laughing. “I told you that game isn’t funny! You can’t pretend to choke! It’s not funny!” I said in a panicked voice. He continued to laugh, and then I laughed, because his laughter made it funny. My daughter walked in, and immediately started screaming bloody murder at her little brother. The sound was unbearable. “What is it? Use your words. Words!! Nobody understands that!” Apparently he had knocked over her Lego structure while waiting for me to come in and play a nonconsensual game of “Look Mom, I’m Choking.” Such an efficient multitasker, managing to distress both his mother and sister in such a short time. She was devastated. I was annoyed, and also filled with remorse for yelling instead of validating her feelings. That’s all you hear about now, the one thing you’re supposed to do as a parent besides feed your children and put a roof over their heads is, “validate their feelings.” I put myself in her shoes. Being misunderstood sucks. I asked if she needed a hug. She said she did. We all spoke in quiet, serious voices, about how it is wrong to destroy something that doesn’t belong to you. We were all a little sad about it. I suddenly smelled poop. As I herded them into the bedroom and started the diaper changing process, my daughter said, “AWWWW LOOK AT HIS LITTLE BABY BUTT!” and he laughed and happily said, “Butt!” It was hysterical. I felt like that “laughing and crying” emoji. Suddenly I understood why it was the word of the year in 2015. I was laugh-crying so hard that it took me a minute to notice the open sippy cup with a puddle of chocolate milk seeping into the white part of their black, white, red and green patterned rug. It had to be the white part. My heart sank. Out of the kitchen I heard “Stand” coming on again, and I couldn’t help but notice that in the time it took to listen to a complete album, all of us had run the gamut of human emotions. And I don’t think we were any worse for it. Why is “moody” considered a negative word, anyway? Could it possibly just mean you’re incredibly sensitive and living in the moment? I decided it was time to have a little talk with my kids about how quickly our emotions can change. And they totally got it. They got it because they’re moody by nature, and adults are the weird ones for trying so hard to water down their feelings. Well, my daughter got it. My son was still yelling the word “Butt!” 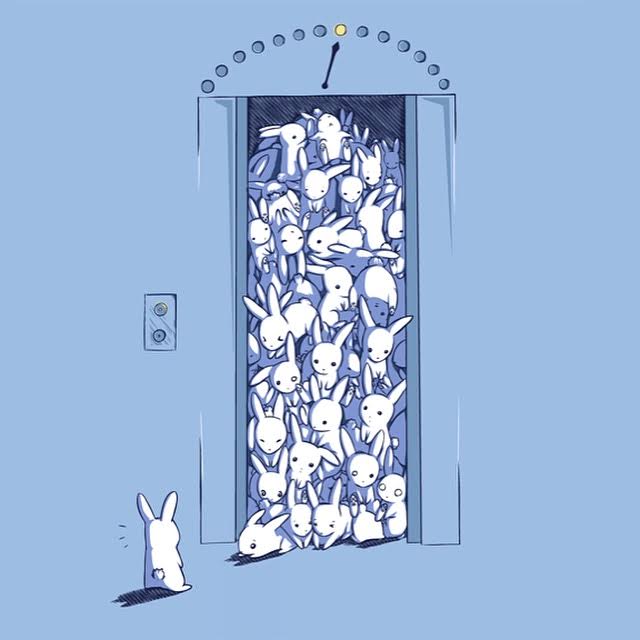 You know how when you’re in an elevator it’s customary for the guys to let the ladies out first, unless there’s a person with a stroller, then they get to go first? Well I was just in an elevator with a dad and his daughter who was in a stroller, and I had my son in his stroller, and we had a legitimately confusing time trying to figure out who should exit first. Babies first? Ladies first? Strollers first? Which stroller? Grown ladies or baby ladies? Maybe the larger stroller should go first? Is anyone asleep? Crying? Does either child have an older sibling at camp who is dangerously close to being stranded because their grown-up got distracted at a shoe store? Is anyone hangry? Did either child recently eat a granola bar? Did said granola bar end up on the ground or in their stomach? Perhaps there’s a blood pressure monitor on hand to determine which adult is in the biggest rush? Just trying to get through the day, people. 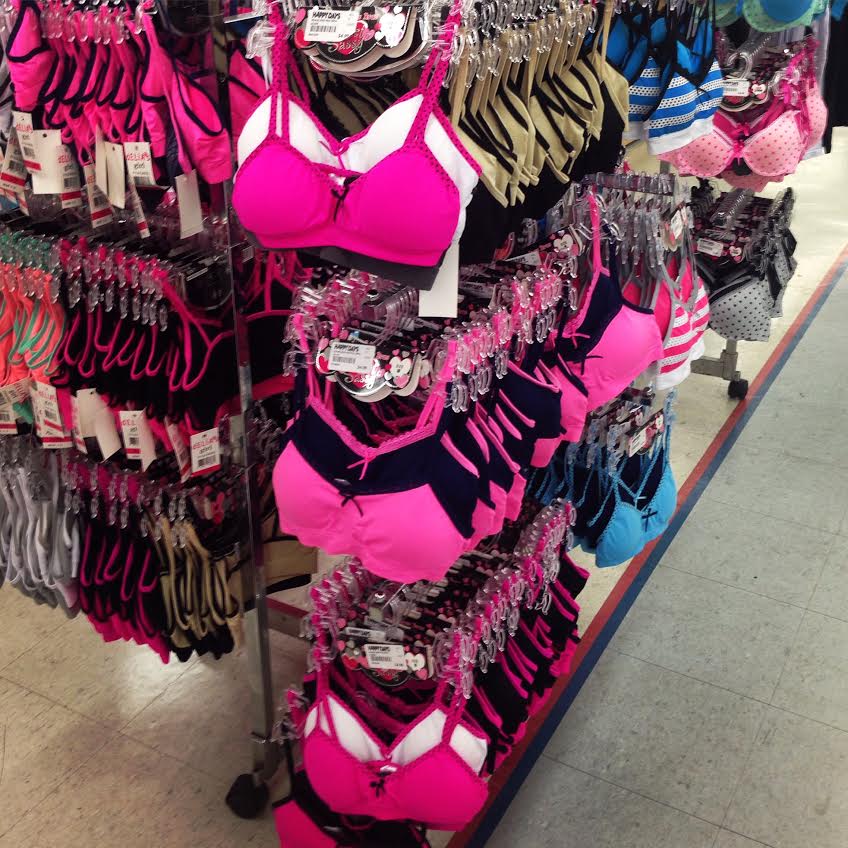 I wandered into a kids clothing store today as I was running some errands, and right in the front of the store was a big display of training bras for “girls age 7-14.” And every single one of them was PADDED. There was not a single normal one. I then proceeded to have a mental breakdown (duh). Listen, I totally tried to sneak and stuff tissues into my training bra when I was in the 5th grade. But this is different. It’s as if “boobs” is right there on each 9 year-old girl’s back to school list, right after graph paper and cap erasers (I don’t know if kids still use either of those things. I’m old). And at least when I attempted to stuff my bra, my mom quietly pulled me aside before taking me to school and asked me if I had tissues in there. Then she gave me a smirk and a little eye roll, and held out her hand. I took the tissues out and gave them to her. The look on her face at that moment told me all I needed to know. It told me that none of this stuff is that big of a deal. It told me that breast size doesn’t matter. It told me that I never need to try to change any part of my body. And I believed her. And I still do. I think of this moment often as a parent, because all the big life lessons I learned as a child weren’t taught by sitting down and having a “talk,” but through my parents unfiltered reactions to life as it happened. Mom, you probably don’t remember this at all, but I do. So thanks. Thanks for making my life a tiny bit easier in that 2 second eye roll you gave to the tissues in my bra. In a perfect world, every mom that walks into that store with their daughter would point and laugh, then they would forget the whole bra thing and go get ice cream.

I’ve been breastfeeding nonstop for almost 5 years. I often fantasize about wearing nice clothes again, things that you can’t just yank on all day without damaging. Sequins. Sequined everything. Recently I caught myself missing turtlenecks. I haven’t worn a turtleneck since 1994. My hormones are a mess. My thyroid is a little wonky. My toddler desperately pleads, “Little boob!” in the most inconvenient places. Half of New York City has seen my boobs. And I feel like the luckiest woman alive.